The physical impact of the massive earthquake that hit east of Nepal’s capital Kathmandu on 25th April 2015 is everywhere to be seen in damaged buildings. Invisible to tourists is the human impact: 9000 dead and 22,000 injured.  An aftershock hit on May 12th killing a further 153 and injuring 3200.

By comparison the experiences of individual tourists are trivial. Collectively, of course, tourists have a valued role to play in providing revenues to help Nepal recover.

Kathmandu is unlike any other city we have visited so far in Asia. We stayed in the tourist area of Thamel. The very narrow streets with low passages connecting them create an intimacy and navigational challenge. Fortunately, the area is small and so you never drift too far off track. Besides, the best street photographs hide in these back alleys and hidden squares.

Debris is everywhere in Kathmandu streets and it is hard to tell what was created by the earthquakes – the last major one was December 2016 – or the extensive sewer replacement programme going on all over the city. 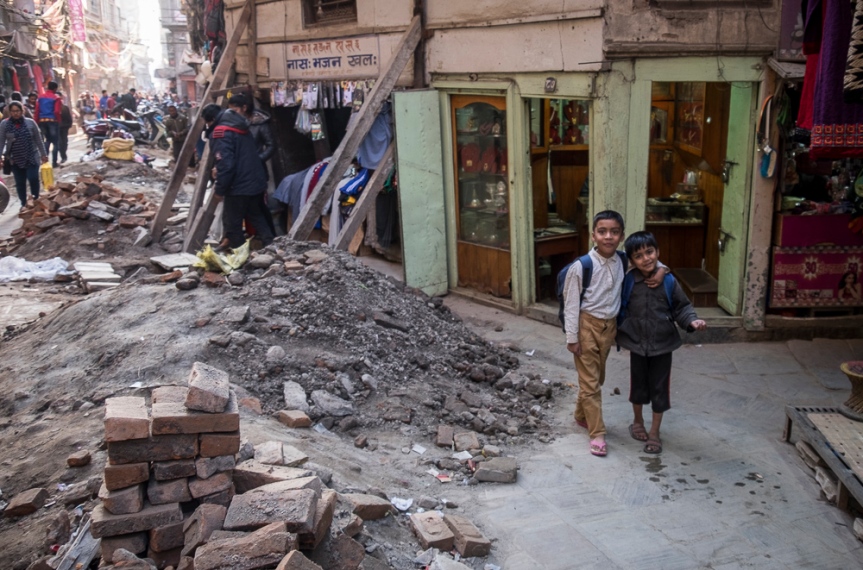 You can imagine the chaos caused by digging up half of the narrow streets in town while cars, motorcycles, pedestrians, rickshaws and delivery carts continue to use them.  There are no pavements so all traffic is using a single lane at once. The prevalence of face masks is understandable given the dust in the air.

While the 2015 earthquake inflicted major damage on older buildings it is surprising how many modern ones seem unaffected. Sadly, the numerous old royal palaces and temples of Kathmandu’s Durbar square – a UN world heritage site – suffered the greatest damage as you can see from the images below. The stunning temples in the square are still impressive. The architecture and detailed carving in wood and stone are testament to the cultural heritage of Nepal. 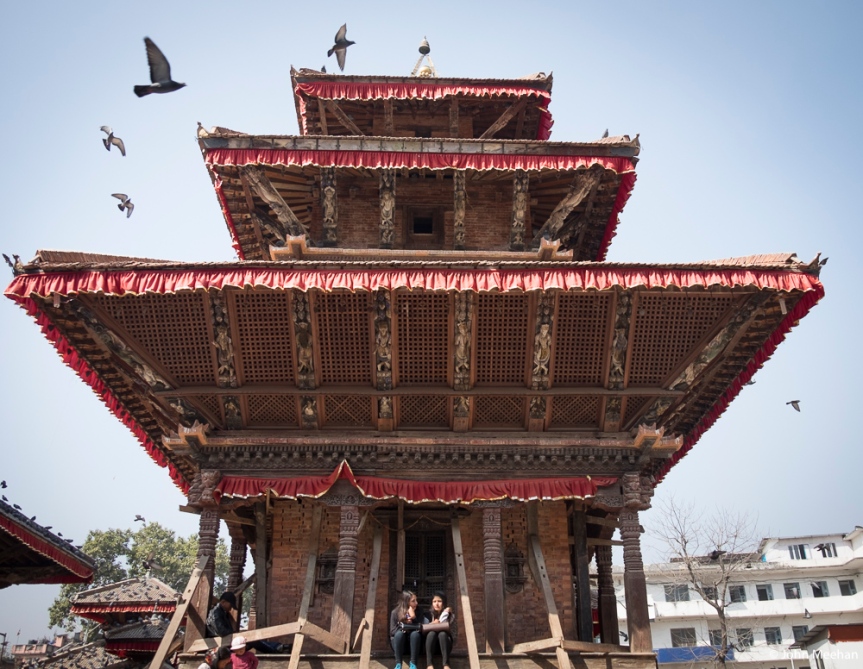 Renovation work is underway but is all being done by hand at a very slow pace. We saw no mechanical equipment at all. Building techniques seem unchanged from when the temples were first constructed in the 16th century. As a result, most damaged buildings are obvious from the wooden supports propping up their outer walls.

Kathmandu suffers from too many bars and restaurants. Most are of a very basic standard and the better ones are still well below what is to be found in most other Asian cities. An indication that Nepalese tourism caters mainly for backpackers and adventurers heading to the mountains rather than those looking for luxury.

We split our time in Kathmandu with a week in the lakeside town of Pokhara (a large sprawling town on the edge of lake Phewa). We’d been given stern warnings by friends to avoid the dangerous buses. The cost of the internal flights to Pokhara, at the foot of the Annapurna mountains, was eye watering but we took the advice. Arriving at the airport we were told there was space on an earlier flight leaving in 5 minutes if we hurried.  John hadn’t banked on acting as baggage handler to get our case onto the small prop plane.

The town of Pokhara is a departure point for treks into the Annapurna mountains and we duly obliged with a two-day trek up to the village of Damphus. We were told the trek would take six hours but somehow we managed it in four. A continuous 10 mile uphill slog in blazing sunshine.

Our guide said we’d set a good pace but we suspect he was being kind. A better indication was given by an old chap who was building a fence until he saw us huffing and puffing and promptly jumped up to offer us each a walking stick. Thanks mate; now we do feel our age!

Our ‘hotel’ in Damphus was on the austere side of basic. Three bunks in our room, outside toilets and shower (nearby rather than en suite).  The food was basic but generously offered. Everything paled in the face of the epic view of the Annapurna range that greeted one of us in the morning (the other determinedly clinging to her bunk when woken at 6.30am).

After breakfast, we headed for the legendary ‘Australian camp’. This tent camp was the first place climbers in this mountain range stayed (and still do). The camp has been expanded to include some Nepali businesses offering basic chalet style accommodation. From there we headed down to meet a car for transfer back to Pokhara. Along the way we managed to hand on our valued sticks to appreciative lady trekkers struggling up the trail in the opposite direction. If they do likewise those sticks could see years of use.

Back in Pokhara, we decided to go to the movies. Actually, it was a screening of Gandhi in the ‘movie garden’ a terraced garden where some young guys – one English – screen classics with a small efficient bar and outsourced pizza keeping punters contented. The provided blankets kept the cold night air at bay. The place was pretty much sold out.

Having trekked in the mountains we were keen to visit the Peace Pagoda situated on the highest hill across the lake. Five miles and a similar number of regrets later we reached the peak. Impressive though the ‘stupa’ or temple was, we were knackered and still had to get back down the very steep hill.

We opted to go direct to the lake where tough looking Nepali’s row tourists across the lake (about 200 yards). As it happened, no boatmen were around when we got there so we persuaded two young Chinese tourists to give us a lift in their boat. They happily obliged and refused offer of payment. Having gone right across the lake to drop us off they began rowing further round. We’d thought they were just returning to the lakeside, not realizing we were taking them out of their way. Thanks guys!

We have enjoyed our time in Nepal but, it is not a place for those with a taste for luxury boutique hotels and fine dining. Backpackers and mountain adventurers are the main tourist groups and so the facilities provided are rough and ready and geared to tight budgets for the most part.

As a final highlight, to stir our positive emotions towards Nepal one final time, we were gifted with a spectacular view of Everest on our noon flight out to Kuala Lumpur – Wow!

2 thoughts on “The top of the world – Nepal”