Picking up an aging Nissan Tilda we wondered whether the old girl (240k on her clock) was up to the challenge of traversing the mountains of North and South islands. We needn’t have worried. In fact, we got to really like the old girl.

We’d be advised to skip Christchurch due to the devastation wrought by the multiple earthquakes there in 2010-12. The romantics in us felt we ought to visit to see for ourselves and push a bit more cash into the struggling local economy.

For adrenalin junkies into extreme sports NZ is heaven and the top place to do it is Queenstown. Not that were your typical Pepsi Max kids – you knew that right? – but Queenstown is the jumping off point for one of the country’s top excursions to Milford Sound.

So, we left Christchurch early for the 480km drive south westward for our introduction to the stunning scenery of NZ. The initial mountain views were so distracting that driving proved a bit more hazardous than normal. 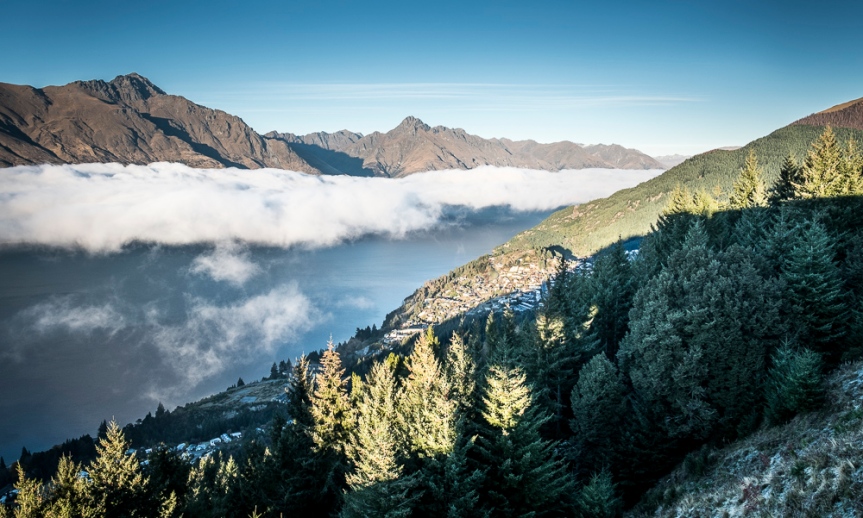 If it wasn’t mountain vistas making us slack jawed it was stunning blue lake after lake. Prime examples being Lake Tekapo which just suddenly appeared as we rounded yet another bend in highway 79 and Lake Pukaki at the base of Mount Cook.

It’s hard to convey the scale and grandeur of New Zealand’s landscape in words (or images). For anyone familiar with England’s Lake District, imagine it was given an overdose of steroids and you begin to get the idea.

We had no accommodation booked in Queenstown but quickly settled on a little studio with a not too shabby view over Lake Wakatipu. To give an idea of this lake’s size, it measures 50 miles in length (almost 5 times that of England’s largest lake Windermere) and covers an area of 112 sq miles or 20 times the size of Lake Windermere. Yep, it’s pretty big!

Even from the Skyline viewing deck perched high above Queenstown it isn’t possible to see more than a small part of this huge lake. Access to the Skyline involved riding in the steepest gondola we’d ever encountered – scarey stuff if heights are really not your cup of tea.

Queenstown may be the place from which most people visit the fjord known as Milford Sound – yes it’s technically a fjord not a sound – but that doesn’t mean it is close by. The bus journey to board the boat to explore the ‘sound’ takes 6 hours each way. Add to that two hours on the boat and rest stops en route and you have a pretty epic day trip in every way.

Fortunately, the informative driver was very knowledgeable about the fantastic landscape we were seeing. The fjord itself was as epic as we’d hoped. The boat trip does a circuit of the fjord and goes out to the Tasman sea so that it is possible to realise that from the sea the entrance is virtually impossible to see. No wonder James Cook sailed right past not once but twice (in 1770 and 1773) leaving it’s discovery to Welshman John Grono in 1812.

As we drove out of Milford Sound crossing te 45th parallel it dawned on us that this was the furthest point from home we would ever be on our trip. We were 11,700 miles from Liverpool and every stop from here would take us closer to home.

We left Queenstown for our next destinations, the Fox and Franz Josef glaciers located – just in time to avoid Tom Cruise’s arrival for more MI filming. Yep, you guessed it –  a 350km back northward on the west coast. The glacier’s are a standard item on tourist itineraries but, in truth both have retreated a long way in recent decades due to global warming. Franz Josef is thought to be the fastest retreating glacier in the world at present.

Our chosen destinations all involved long drives and none more so than our next ‘hop’ to Kaikoura on the east coast of South Island north of Christchurch. This drive involves a 500km slog up the east coast and then right across the island from west to east over the Southern Alps via the Lewis Pass. Evidence of the previous November’s earthquake was everywhere with rock slides and twisted roads around the mountains.

The big attraction at Kaikoura is whale watching. We were booked in for the regular tour which promised an 80% refund if you didn’t see a whale. Our research suggested 1-2 sightings were normal. Well we managed to see three sperm whales for quite extended times as they basked on the surface before deep diving for up to 40 minutes. Part of the fun is the chase around the ocean to spots where echo sound equipment has detected whale songs.

The whales are the subject of a long term scientific study as part of conservation efforts so all boats – there were only two comprising ours and the research boat – stay quite a distance from the whales. Many of the whales are well known individuals who are regular visitors identifiable by their unique fin profiles and scars.

Our hotel in Kaikoura was just about the last stop on the edge of town. While still only 10 minutes drive from our whale watching boat it felt on the margins. This didn’t matter as we’d long ago realised that going out every night to eat was tedious and had opted for hotels with kitchenettes so we could cook our own meals. This was not only far cheaper but, more importantly, far healthier than the standard burger and pizza menus of many of the restaurants we encountered.

Blissfully happy after our whale sightings, we steeled ourselves for the journey northward to Picton where we were to get the ferry across the Cook straits to North Island. In normal times this is a gentle two-hour drive northward along the coast. But after the major earthquake in November 2016 these are not normal times in this part of NZ. The coast road was closed due to landslides. The result was we had to retrace 400km of our journey to Kaikoura in order to access the alternative road into Picton. This meant what should have been a two-hour 150km journey became a 475km marathon over the mountains. This took 7hrs because the mountain roads were also damaged and road crews were everywhere doing repairs and reducing many sections to single lanes.

Arriving at our hotel in Picton, we were informed that bad weather was disrupting sailings and ours, the next morning, was cancelled. Before checking in we headed down to the ferry port to get the latest information. They confirmed our sailing the next day was cancelled but offered to put us on the last sailing that night – leaving in two hour’s time. We headed back to the hotel to tell them we weren’t staying!

The interisland ferry from Picton to Wellington across the Cook straits is renowned as one of the most beautiful boat trips in the world. This is why we’d opted for a hotel stay so we could do a daytime crossing. In the event, here we were doing an all-night crossing without the consolation of great views.

We passed through Wellington quickly. It is a port town with some beautiful old colonial style houses but in truth is unremarkable. Perhaps it’s biggest claim to fame is that the short story writer Katherine Mansfield was born there in 1888. She left at 19 and joined the literary circles around D H Lawrence and Virginia Woolfe in London (before dying of tuberculosis aged just 34).

We were heading for the self-described Art Deco capital of New Zealand that is Napier. Napier is in Hawke’s Bay on the east coast of north island. More famous as a wine growing region, the town of Napier has many gorgeous art deco buildings dating from a major rebuild of the town following a devastating earthquake in 1931. The town was almost completely destroyed but rebuilt within 3 years. Thanks to the efforts of a local art deco society, the buildings from that time are being preserved and restored. The town has an annual Art Deco weekend I July to which people come from all over the world to parade around town in vintage cars and costumes.

Napier is a really beautiful town and has some very good restaurants offering a diverse range on cuisines from Turkish to the obligatory Thai to local seafood specialities. The vino from the Hawke’s Bay producer’s is very high quality too.

From the genteel propriety of Napier we moved to Rotorua. We’d added Rotorua to our itinerary because the Lions were playing there against the Maori All Blacks. Rotorua is the centre of Maori culture and it was very visible due to the excitement of the big game. There was to be an attempt on the world haka record in a park in the centre of town the day of the match. So, we headed down there to be one of the 7770 people – about 50% maori and the rest tourists – performing the haka in an attempt to set a Guinness world record and regain the crown from the French (yes the French hold the official record of 4200). So we are now pending Guinness World Record achievers, but it will be months before the attempt is officially confirmed, fingers crossed.

Unable to get a reasonably priced ticket we opted to watch in a downtown bar. On our way to the bar the Lions coach passed us on its way to the stadium a couple of miles away. Thankfully, the Lions did the business that night demolishing the Maori All Blacks 32-10.

Us and the Lions left Rotorua on a high for now – the full All Blacks team lay in wait.

We left New Zealand via Auckland airport. Our next stop was Tahiti in French Polynesia. This was strictly a rest stop. We’d have preferred to go straight on to Los Angeles but, the fares for direct flights are kept very high to encourage stop-overs to support Tahiti’s tourist dependent economy.

New Zealand made a deep impression on us due to its stunning scenery. Mountains and lakes dominate the landscape and it is hard not to think of the scenes from Peter Jackson’s Lord of the Rings as you drive through misty mountains and past vast lakes, marvel at huge open plains and crawl over yet another epic mountain pass. There is a whole tourist industry built around taking tourists to the locations used in the film – including Hobiton which is ‘the shire’ in the movies.

With the exception of the few relatively small cities, almost everywhere we went the towns were very small by UK standards. Many had populations counted in the hundreds and were no more than gas stations and convenience stores where the farmers scattered around called to get essentials.

We had a strong feeling that New Zealand is a very underdeveloped country. At 268,000 sq km it is slightly larger than the UK (242,500 sq km) but has a population of only 5m (UK has 65m). Therefore, wilderness, not people, dominate the experience of the place. The prevalence of earthquakes – the evidence was everywhere – also makes you very aware of the mighty forces of nature that continue to reshape this epic landscape.

Though wild and untamed, those depleted whale numbers and rapidly receding glaciers make you realise that it also needs protecting from the effects of human induced global warming. Let’s hope New Zealand’s wild nature remains intact for generations of locals and travellers in the future.

2 thoughts on “New Zealand…Sweet As”